The statue of Radegast, the Slavic god of the sun, abundance and fertility, is one of the unmistakable symbols of Radhošť in the Beskid Mountains, or more precisely of the pass below Radhošť, where it stands precisely at the halfway point between Pustevny and Radhošť at an altitude of 1,105 m.

What the legends tell us

Radegast was a Slavic god worshipped primarily by the Slavic tribes of the Eastern Baltic. How the cult reached as far away as Radhošť is not known, however.

The original giant Radegast statue was apparently carved from wood, it wore armour of pure gold and boasted a fearsome helmet. It was part of shrine, where apart from animals, humans would also be sacrificed. The missionaries Cyril and Methodius ordered that the pagan idol be torn down, chopped in pieces and burnt. A pagan priest managed to save the statue, however, and concealed it somewhere inside the mountain in an underground shrine, where it perhaps is still hidden today.

The Radegast statue in the form we know it today is the work of academy sculptor Albín Polášek, born in the nearby town of Frenštát pod Radhoštěm. He began work on the statue in 1924, and we know that several variations on this theme were created in the USA, where he was living at the time. In 1930, the artist hired the Novák Studio in Prague and created the final form for his Radegast. A man’s body, a lion’s face, with headgear in the form of a horned bull’s head, in his right hand he carries the horn of plenty, in his left an axe.

Polášek’s Radegast statue, made from concrete and aggregate, was installed on site in 1931, and officially uncovered on 5 July. This original statue, measuring 320 cm and weighing 1.4 tonnes, was financed by Czech emigres in the USA, who devoted the statue to their homeland. The statue is deliberately placed with its back to approaching walkers.

The statue’s material has not fared too well in the relatively tough climatic conditions that reign upon Radhošť. It has been necessary to remove the work and restore it. This occurred in 1980, and the process was supervised by the Olomouc sculptor Karel Hořínek. The statue was returned to its rightful place on 11 June 1982. 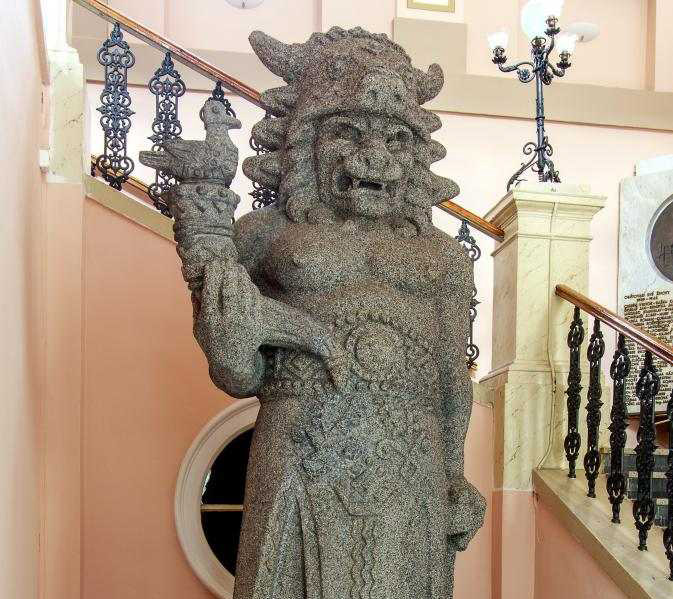 Taken from the web kampocesku.cz

Despite the expensive restoration, however, the material from which statue is made continued to deteriorate. For this reason, in 1996 the Radegast was brought down from Radhošť and placed – ready for essential restoration – in the entrance hall of Frenštát Town Hall. Radegast (or at least its copy) was returned to the slopes of Radhošť on 4 July 1998.

Taken from the web kampocesku.cz

The replica statue has been carved from natural stone (granite) and its construction was funded by the Radegast Brewery in Nošovice, whose beer bears the statue’s silhouette on its label. The granite will withstand the tough mountain conditions much better. Under the supervision of academy sculptor Miroslav Machala, the mason Jan Sobek from Leskovec u Vsetína carved the new 16.5 tonne statue from a block of granite.

You can easily get to the Radegast statue from Pustevny by following a broad footpath, along which runs the blue-marked footpath and the European long-distance E3 path.3.