Pustevny makes an attractive destination – whatever the weather. You can be taken up to the resort, not far from the legendary mountain Radhošť, by chairlift, you can walk, or cross-country ski in winter and mountain bike in summer. Pustevny is the most popular recreational centre in the Beskid Mountains, and the Radegast statue, which you’ll find along the path to the top of Radhošť, is the most famous symbol of the entire Moravian-Silesian Region.

In the mid-18th century, a hermitage was built for a hermit close to the first wooden Radhošť chapel, and it is from this structure that the modern resort derives its name. The last hermit was apparently a man called Felix, who died in his mountain retreat sometime around 1784. 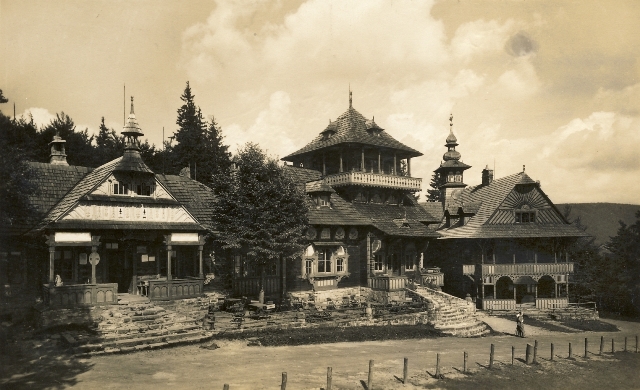 Taken from the web trojanovice.cz

Taken from the web trojanovice.cz

Pustevny’s attractive scenery drew members of the Frenštát association Radhošť Mountain Union, who made it their aim to open up the remote places of the Beskid Mountains, mark out footpaths, and set up a network of mountain huts and accommodation.

They were the first to build a refuge here – Pústevňa – in 1891, and followed it three years later with a second hut they called Šumná.

Later, with the rise in popularity of rambling, the union decided to improve the site’s accommodation and catering facilities. Two more refuges were commissioned, to be designed by the Slovak architect Dušan Jurkovič in the style of Folk Art Nouveau. Libušín and Maměnka opened their doors in 1899.

Owing to the decline in hiking after the First World War, the next wave of building at Pustevny occurred during the First Republic Period. In 1926, a more modern mountain hut, Hotel Tanečnica, was completed. Six years later followed another mountain hotel, the Radegast, erected on the ridge between Pustevny and Radhošť.

In time, the refuges at Pustevny slowly fell into a ruinous state, so much so that during the 1980s the Wallachian Open Air Museum developed a plan for the complete renovation of Libušín and Maměnka. The museum’s plan was not put into practice, however, until 1995. After fours years, in 1999, the restaurant Libušín was officially re-opened and the hotel Maměnka also began accepting guests in 2003.

During the reconstruction period, the Pustevny resort was declared a National Cultural Monument.

Another of the wooden constructions designed by architect Dušan Jurkovič at Pustevny was the 100-year old wooden bell tower. Unfortunately, this colourful decorative structure, created by Dušan Jurkovič, did not survive. Nonetheless, the architect’s original blueprints, stored in the Slovak State Archives in Bratislava, were used to rebuild the structure in 1997 and cover it in a wooden shingle roof.

On the night of the 2–3 March 2014, an extensive fire broke out at the Libušín refuge, which destroyed in particular the right-hand part of the building, in which the aesthetically priceless dining room had been located.

Now, renovation of this historic chalet is currently underway, and completion is due for mid-2019. You can find out more information on the Wallachian Open Air Museum website. 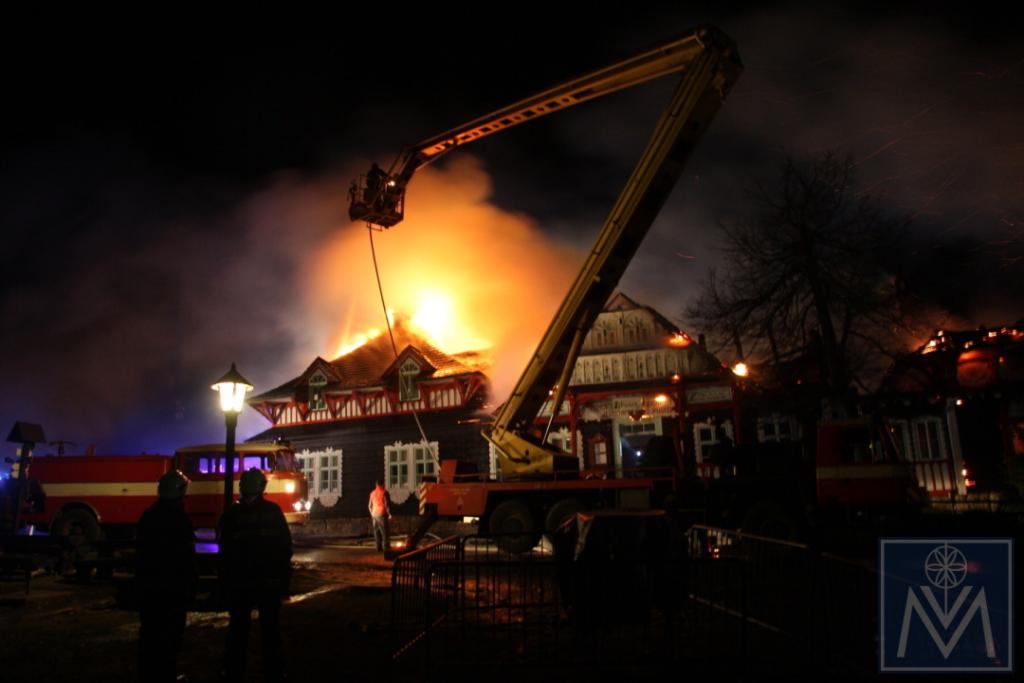 Taken from the web vmp.cz

Taken from the web vmp.cz

A new upper chairlift station was put into service in 2017. It stands on the site of the original building, which had to be demolished in 2016 owing to its very poor condition.

The new station is a modern building constructed from stone, wood and glass. It is the work of Kopřivnice architect Kamil Mrva, who for years has been collaborating with the municipality of Trojanovice and has worked on the shape of the Radegast Beskids project. The entire building has been designed with the natural location in mind, so that it fits perfectly into its Pustevny setting.

From Pustevny you can set out to climb Radhošť mountain, which has become a symbol of the local landscape. Along the way you’ll encounter the most famous symbol of the Moravian-Silesian region, the statue of the pagan god of fertility Radegast, made by the Frenštát-born artist Albín Polášek.